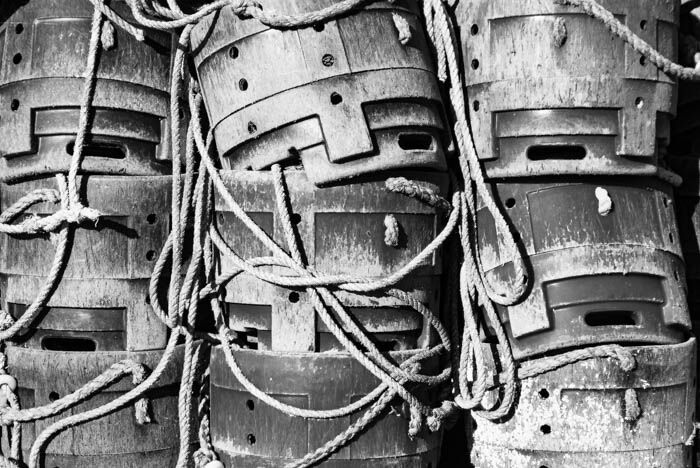 Lobster Pots, Dorset (click image to enlarge)
There’s been a lot of controversy this week about people overdoing their response to the easing of lockdown restrictions and travelling to where their instincts take them. So, let me first say, in showing this picture taken in a Dorset waterfront location, that it wasn’t Durdle Door, it wasn’t at a weekend, and it wasn’t during the day. I took the precaution of going to one of the slightly less populated spots – Mudeford – and I went on a weekday in the evening, when there were few people around. And I avoided by a minimum of 2 metres those who were there.

I used to live near Mudeford and have taken loads of photographs there and in nearby Highcliffe – another place that means a lot to me. There always seems to be something to shoot, from the serene inland lagoon to the beach huts to the odds and ends the fishermen store on the quay, and the mood of it all changes with the weather and the seasons. It’s beautiful in the summer, but sometimes I prefer it in the winter, when it is more desolate and when the brutal winds blow in from the Channel and stir up the sea onto a boiling froth – when it becomes altogether more primal. Knowing that across the way is Hengistbury Head, with its ancient human settlements, adds to this feeling of connection to a primeval presence.

This shot is, of course, lobster pots. They lent themselves well to a straight-on photograph, which seemed to work best in black and white. Perhaps the motivation to have them in black and white came from a subliminal source - the cultural memory of lobster pots in old Victorian photographs. Who knows? The subconscious tends to do its thing without announcing itself. Coincidentally, a friend this week wanted to talk about ‘formalist’ photography. I’d say this isn’t quite that because textures and the sense of the subject matter are still foregrounded, but the stacking and the sense of rhythm/repetition, enhanced by the removal of colour, with the further variation it would bring, do give it hints of formalism.

I should also that, this week, my more directly commercial photography, in the form of product photography, has continued as usual. I am available for commercial and architectural photography in the three counties – Somerset, Dorset and Wiltshire – and photographs as art continue to be available. See in galleries on this site.
Next
Previous