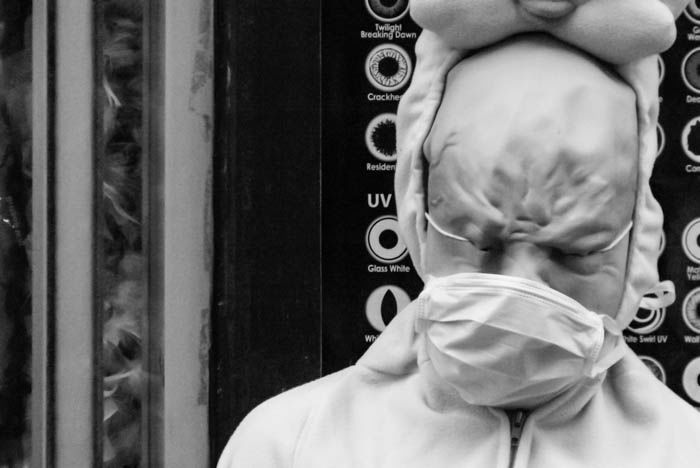 Manikin and mask
Previous
Next

Sign o' the times…
I usually report on what I’ve been up to in my professional photography in these pages, but this week I couldn’t resist posting this.

I should say, straight off, that this isn’t shot on one of my professional cameras. I often carry around a small compact, just in case I see something that begs to be photographed on the street, and here’s a case in point. My full-frame Nikon would have done a much better job, but sometimes there’s texture and atmosphere in shots taken on weaker cameras that capture something about the rough-and-readiness of what one encounters on the street. The legendary Japanese street photographer Daido Moriyama only uses a compact camera, not wanting to allow the impulse to create the well-crafted photograph to overtake the immediacy of seeing and shooting, and many of his most famous shots are grainy and even blurry.

This rather grotesque thing was stood outside a shop, and something about the abjectness of that face seemed to demand that it be captured. The shopkeeper must have already put out the manikin to attract the curious into his/her shop. Putting on the mask added a bit of topicality to the display. Gallows humour meets entrepreneurial spirit.

I guess this is something we are all going to have to get used to living with over the next few months. Like the photo: not nice, but there it is.
Next
Previous