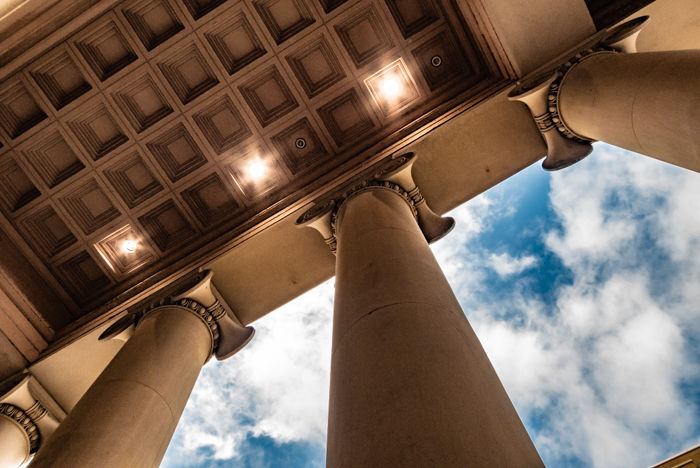 Elegant classical architecture with a bit of modern electric light
There used to be loads of these Palladian porticos scattered across the UK, on the fronts of stately homes, banks and important municipal buildings. And there are still many, but others have been lost through redevelopment and the post-war belief that nothing counted but rationalist minimalism and the shock of the new.

That has stopped, so there are still many of these to gaze at. Their origin is the classical era of Greek and Roman cultural dominance of Europe and the Levant. One of the most famous from back in those days – The Parthenon – still stands. And that gives these structures their desirability and authority. These porticoes are symbols of a powerful sense of order, both in their solid characteristics and the skill and wealth of funds required to build them. Such a great mass of material and the skill required to fashion it doesn’t come cheaply.

The name comes from Andrea Palladio, a highly influential Venetian architect who lived in the 16th century, but who borrowed from these earlier styles.

This one is in Manchester – The City Art Gallery – but I have photographed many more, including those at Stourhead, not far from my home in Bruton.

If you need an architectural photographer in the region, I’m only a text or a phone call away.