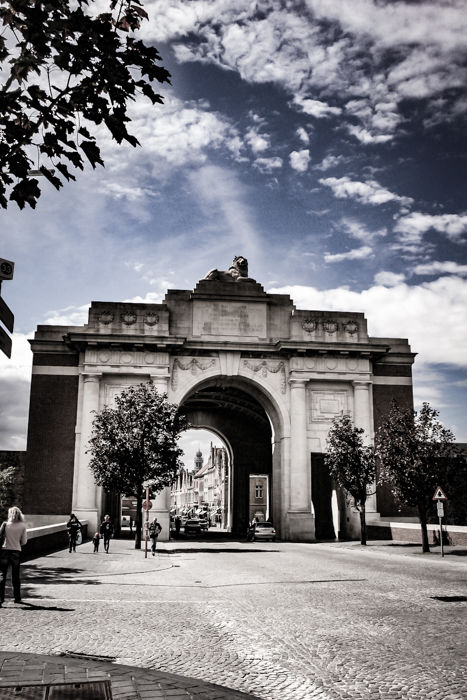 The Menin Gate
At this time of year I always skip my usual stuff about commercial photography and post a photograph that reflects Remembrance Day. This one is, of course, The Menin Gate.

Most people know at least something about this structure, so knowing quite what to write is tricky. Where its name comes from might be something I can talk about, something that is a little less widely known than other aspects of this monument. It is located in the Belgian town of Ypres, where once, on its eastern perimeter, a gateway passed through the walls which surrounded the town. That route led and still leads to the small town of Menen. ‘Menin’ is an anglicised version of that. Its significance in this is that it also marks the route that allied soldiers took to the front line during World War One.

It is dedicated to all the men who were killed at the Ypres Salient who have no known grave. To walk into the gate and see all the names etched onto the interior is a profoundly moving experience. There are 54,896 names. The effect of gazing up at them is overwhelming. There are just so many. It is both hard to take in the sheer number and to think of these as all individuals, all young men with their own private lives and stories and dreadful deaths – so much more than just statistics. And these are just the ones without a grave. Thousands more are buried in cemeteries around the area.

That whole War throws up many more scarcely fathomable statistics of death and destruction and of the herculean effort put in to make it all happen and keep it running for four years.

Ypres itself was flattened almost completely during the War. It is said that a man on a horse could be seen on one side of the town from the other, so thorough was the devastation. Amazingly, it was rebuilt from old plans, drawings and photographs, and today looks like an authentic medieval Flemish town. It's a pity that the planners who wrecked the centres of Exeter, Plymouth, Southampton and the rest, after the Luftwaffe had done its thing, couldn't have followed that example.

I guess few families were not affected by the First World War. My paternal granddad was injured – shot and gassed – but survived; my maternal great uncle did not. I looked for his name in the Menin Gate. I found the right surname, but not the right forename, but then, this might not be where he is remembered.