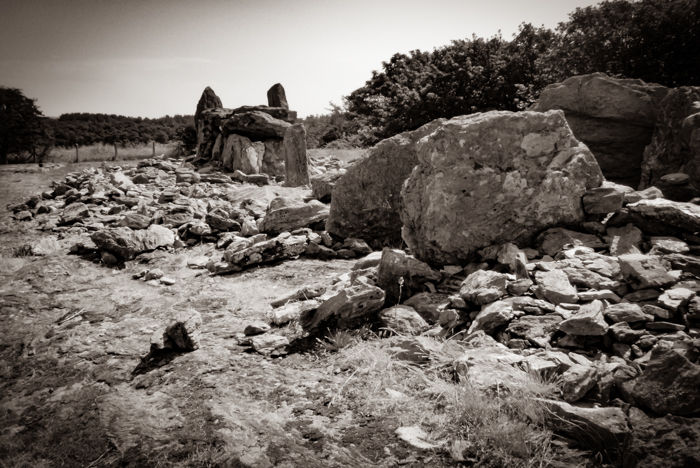 Digging the scene…
For this week’s image and tale, I have chosen this feature in North Wales. It is on Holy Island, a tiny island off Anglesey, which has on it the port, Holyhead, and the resort town, Trearddur. This is Trefignath Burial Mound, a ruined Neolithic tomb or, rather, series of tombs, as this is three tombs placed together. Choosing this photograph and writing this blog on Halloween seems to have a degree of appropriateness, this structure being a remnant of a dark, mysterious, long-dead past.

In the foreground is the oldest tomb, dating back possibly to 3750 BC. The one at the far end – the most intact and vertical one – is a few hundred years younger. That in the middle, of which least survives, was built both physically and temporally between the other two. They were originally surrounded by a cairn, which is to say, they were surrounded by stones and took the form, more or less, of little man-made caves. This was mostly destroyed in the late 18th century. There is also evidence of a settlement which existed around the tomb. The site was excavated and preserved in the 1970s. It is now a Scheduled Ancient Monument, preserved by Cadw.

From a photographer’s perspective, it is of course a gem. Using a digital camera, the shot was originally a straightforward colour photograph. This has been changed - enhanced, I would argue - by the use of a nearly black and white, slightly sepia treatment, to give it a hint of age. Similarly, vignetting has been introduced – dark edges and corners – as this is an effect that often occurred, unbidden, with early cameras. It has been shot with a small aperture and wide lens setting to ensure that both the foreground and background tombs stay in sharp focus.

This is the kind of photographic skill and aesthetic judgement I can offer to tourism-related organisations and businesses, and to conservation bodies. If you could use this kind of work, do please get in touch via the contact page.
Next
Previous