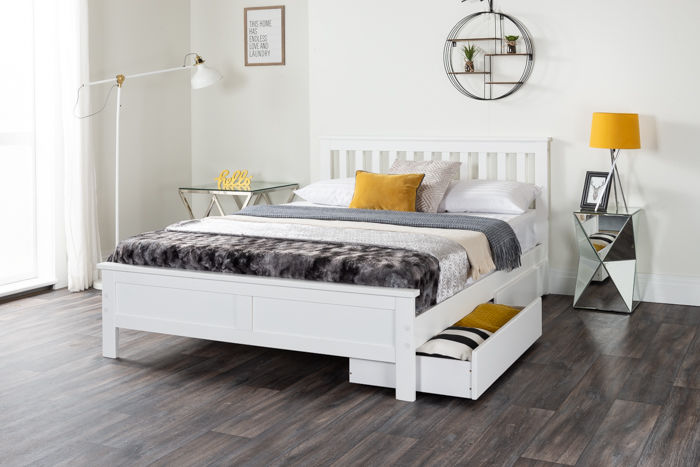 Ideas for commercial photographers…
Commercial photography comes in many forms, from tiny items like jewellery to objects as large as ocean-going liners, and each presents its own challenges to the photographer. This week I have been photographing furniture, specifically beds. Banal things, beds – everybody’s got one – but that does not make them necessarily easy to photograph.

There are two main issues: getting enough light into the right places around a relatively large object, and getting far enough away from the subject to minimise lens distortion.

After some experimentation, here we used three studio strobe lights: one behind the window on the left of the shot; one to the right of the product; a third near the photographer’s left shoulder, shooting more or less at the front of the product. These were adjusted for intensity, so that there was a degree of shadow crossing the bed, giving a sense of a more natural flow of light. Had all the lights been turned up high, the bed would have been sublimely lit from all angles, but the scene would have been too bright and would have not looked like a natural, homely setting.

To eliminate distortion as much as possible, the camera was taken as far back as the space allowed. Ideally it would have been further back, but what distortion remained was taken out in the editing process: curves were removed from what ought to be straight lines, and verticals were made properly upright. The focal length was 44m. Ideally I would have liked it at around 70mm. The aperture was pretty small – f11 – to ensure the whole set up, front to back, remained in focus.

Other settings: ISO 200, 1/125th. Lens Nikon 24-120mm zoom, full frame. Click image to enlarge. Please note, this website only permits 700 pixels long side files. The original is a much bigger file and much sharper photograph.
Next
Previous