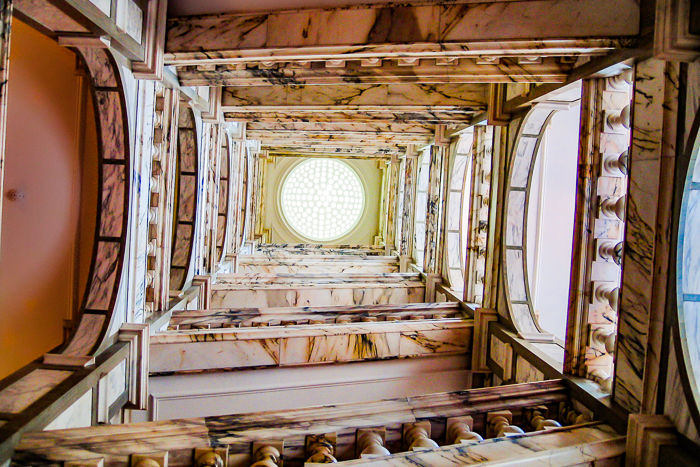 Climbing to the top…
Staircases often represent a place where an architect can bring in a creative flourish and therefore also make a good photo opportunity for a photographer with an interest in architecture.

This magnificent marble structure is within the Rosewood in London. Others might know it as the Chancery Court Hotel, which it ceased to be in 2013. Prior to that incarnation, to 1989, it was the headquarters of the Pearl Assurance Company. It was built for that firm between 1912 and 1919. And doesn’t it just show off the opulence of a confident financial institution. It is located on High Holborn, right in the heart of WC1, a short stride from Holborn tube and backing onto London’s legal district.

The abundant use of marble gives it a palatial quality. The rest of it is no less striking. The 2013 makeover came in at around £85 million. The Edwardian Belle Époque building’s original features, including this amazing staircase built from Pavonazzo marble and climbing seven floors, have been retained, along with the original carriageway entrance to the courtyard. The magnificent façade and interior mahogany and marble features have also been preserved.

It has also been the setting for films and TV programmes, including The Saint, The Politician’s Wife and Doctor Who.

As you would expect, it isn’t a cheap place for a stopover. You’re looking at around £500 per night. My interest in it, however, was entirely aesthetic, and I just had to shoot this vertiginous shot looking up through the stairwell.
Next
Previous