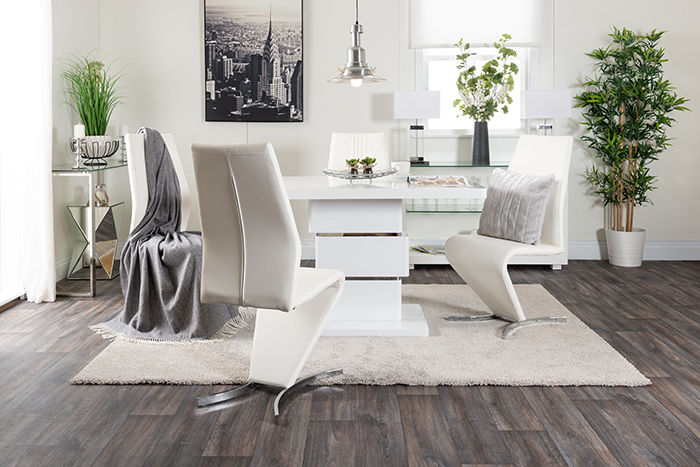 Getting it right…
Taking product shoots of large items like furniture requires a great deal of special attention. It is not something one can usually approach with a basic camera and available light or a simple flash.

This shoot and many I have done like it was conducted on a specially built set, which mimics a typical room setting.

A key issue is having enough light and getting it into the right places. You would wish to avoid deep shadows where the product cannot be properly seen. On the other hand, you need some shadow to make the scene look naturalistic. Here, I have used three studio strobe lights, to get an even but not overwhelming spread of light. One light is side-on to the product group, another is behind it. These both shoot through ‘windows’ to give the effect of light streaming in naturally from outside. A third light is at the front in ‘the room’, at around 45 degrees to the set-up, to illuminate the foreground.

The camera is set to manual, with the smallest aperture that could be achieved without under exposing (f11), so there is a good depth of field and the whole set from the leading item through to the wall behind is in focus. The speed was 1/125th. Notionally, one might set a lower speed to get an ever smaller aperture, but this doesn’t work because the duration of the flash is fixed and holding the shutter open longer will not bring in much more light. The ISO was set at 200 to get nice crisp, noiseless shots.

The photographs were shot in RAW and were edited afterwards. Curves created by the lens were straightened and all vertical lines made to follow their intended route. A danger in shooting so much white furniture under powerful strobes is blown or burnt out areas, where too much light reflects off a white surface. This should be obviated by the small aperture, but if/where it does occur it can be taken out by delicately balancing tones in the RAW shot in the digital editing process before converting it finally into a user-friendly jpeg.

Of course, you also need to create a pleasing set - something you might do yourself as a photographer or that might be done by someone with specialist design skills in that area. Another key concern is attention to detail when preparing the finished shots for handover. For example, erasing bits of dust and marks that occur on the product or set.
Next
Previous