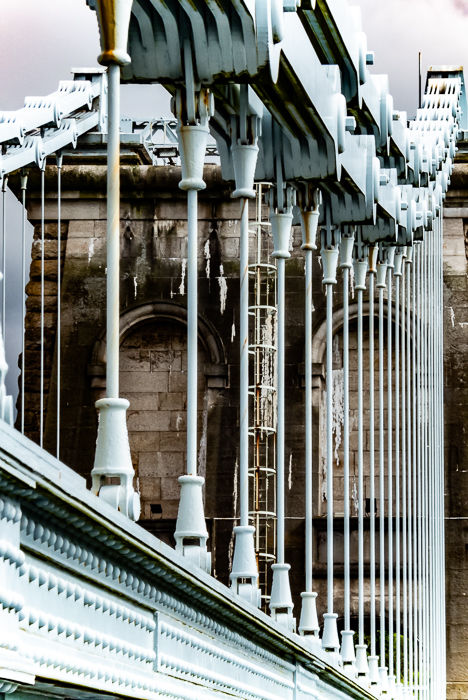 Capturing structures...
Architectural photography is one of my key areas of interest, but I'm not sure if when photographing a bridge one is photographing architecture or engineering. I guess all structures contain elements of both. After all, everything has to be made to work structurally, so engineering in some form always plays a part. Though clearly, in some kinds of structure, engineering is much more to the fore. And so it is with bridges, and suspension bridges seem most of all to wear their engineering on their sleeves. The engineering in a conventional bridge might be hidden beneath smooth stonework, but on a suspension bridge it is all there to gaze and marvel at.

This marvellous thing is the Menai Bridge in Wales. The photograph was taken on a recent trip to the area. It is one of numerous shots taken on the day. I will no doubt post others in the fullness of time.

It seems amazing that such a radical structure dates back to the early part of the 19th century, but it does. Designed by Thomas Telford, it was started in 1819 and completed in 1826, though it has undergone many strengthening measures since, including replacing the original wrought iron components with steel.

The reason it was considered necessary to build such a major bridge in an otherwise perhaps slightly obscure bit of North Wales is that this was a key route, linking London to Dublin via Holyhead, on what became the A5 road. Before this, everything that went to or from Anglesey had to pass over the treacherous waters of the Menai Straits by ferry.