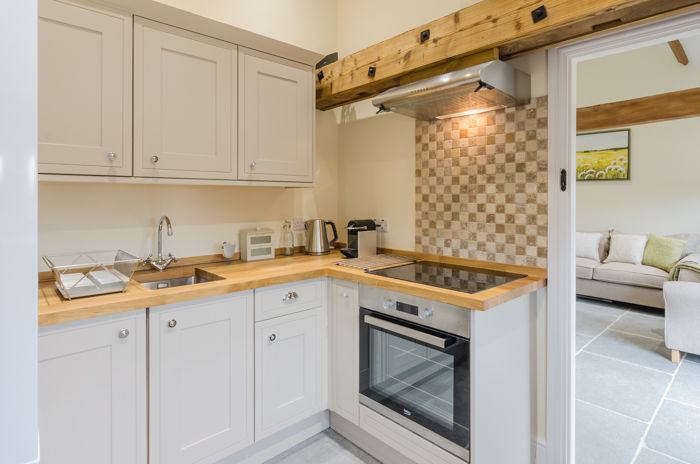 Making the most of interiors…
This is from a recent shoot, creating images for a website for holidays lets. The shoot involved interior and exterior images of the buildings and their facilities, and close-ups, which acted as scene-setters, giving potential customers an idea of the ambience of the place.

I chose this one to display because is has a kind of quiet authority about it. It is a deceptively simple photograph, catching the clean lines of the property’s kitchen, but it also shows some of the lounge beyond, so I feel it gives an idea of the ‘flow’ of space.

I say, ‘deceptively’ simple, because there are decisions in it which might be taken for granted: it was necessary to try to get the far space into a degree of focus, in order that it might be seen, even while making the foreground the key focal point, and to balance the tonal relationships of various parts of the spaces. The walls were painted in very pale colours, so it was important to allow some shadow to creep in, so that the photos did not seem too bright and sterile. A wide-angled lens was used to capture as much of the space as possible – not an easy thing, given that there was little space to step back into to include more. The photo was then straightened in the editing process – lenses ‘bend’ spaces, so straight walls become banana-like if not corrected. You will see that effect in many amateur interior photographer’s photos.

If you could use this kind of photography in Somerset, Dorset or Wiltshire, do get in touch.