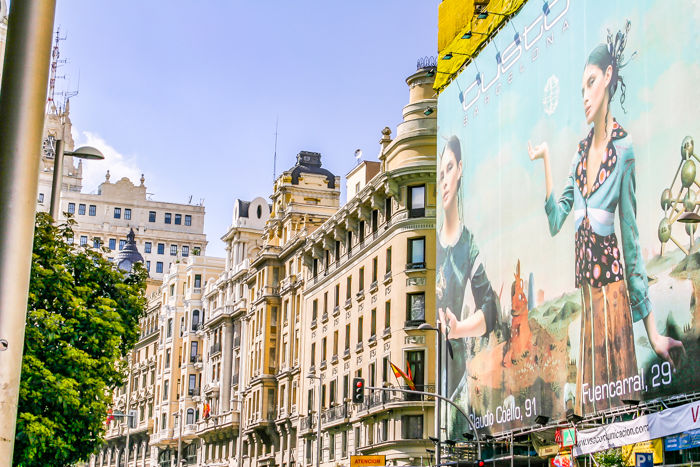 A street in Madrid
Previous
Next

On tour…
With us apparently about to leave the EU, it seems appropriate to choose for this week’s pic of the week a shot of somewhere palpably European. This is Madrid, taken on a trip there a few years ago. I enjoyed this photograph because of the slightly surreal feeling created by the massive, building-sized fabric billboard, placing giants on the street, and I have tweaked it in the editing process to enhance colours and contrast to extend this surreal effect. This being the land of Salvador Dali and Joan Miro’s birth, I guess that is an eminently reasonable thing to do; not that I think this in any way reaches the extreme dreamlike qualities their paintings have; it’s just a teensy bit beyond real in its execution. I also enjoyed using a pretty wide angle on this one and creating that steepling vertical perspective.

I have to say, I have a great affection for continental Europe – its landscape and its cities, and not a few of its people. It is such a place of contradictions: its architecture, its art, its music, its philosophy, its literature – all of it reeks of a profoundly intelligent culture, with a deep understanding of the human condition, but has anywhere seen such horror, such misery and such destruction, through wars and political persecution? I will leave discussion of that to the philosophers and continue just to quietly make images of what I think is beautiful.

I have thousands of photographs of cities in the UK and continental Europe and am of course always available for commissions for photographs for tourism or for décor.