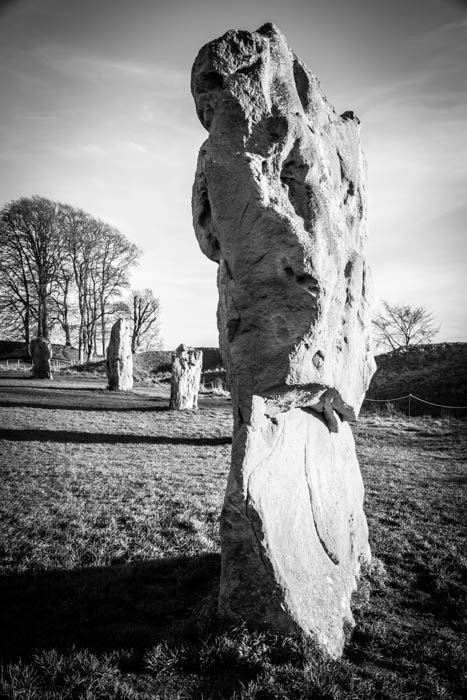 Went to see The Stones, man!

The ancient stone rings of Avebury in Wiltshire
Took myself, my camera and friends off to Wiltshire for a day to see the stones circles at Avebury.

My first impression was how busy the place was. I'd mistakenly thought it would be a desolate place, which all but those with a specific interest in history would eschew. But no; it is something of a low-key (pre)historical theme park, with a big, expensive car park, memorabilia shops and cafes, and crowds that were not put off by the damp, foggy Christmas weather. So it was difficult to commune with the stones in the way one might like – I’d imagined a kind of meditative engagement with them, whereby I could prompt my imagination to penetrate their history in some way. But it was difficult to spend that sort of time, as other folk materialised at one’s shoulders as soon as stood to contemplate. And it was quite difficult to take a photograph that contained only stones and not crocodiles of families trailing along the paths. But I can’t complain; the democratisation of transport that enabled me and my entourage to be there was the same one that brought all the others. Such is modern life.

But still, I did get some quiet contemplative moments with the stones, and another impression in such moments was how clear it was to see what sculptors like Barbara Hepworth and Henry Moore were about in their work. It is impossible for those with an artistic or poetic bent not to approach these monoliths with a phenomenological frame of mind and to feel some form of emotional blast that connects in some abstract way to their mystery, history and, dare I say of just loosely-cut stones, grandeur. Looking at the one in the photograph, one could almost be looking at part of a Henry Moore sculpture. In other locations, where two stones become juxtaposed as you move around them, it is hard not to believe that what you see is quoted in his work and that of Hepworth and others.

But, with just a camera in hand, my efforts could go no further than just recording and interpreting what was there, not building some massive new edifice inspired by it, but I hope you like it.
Next
Previous