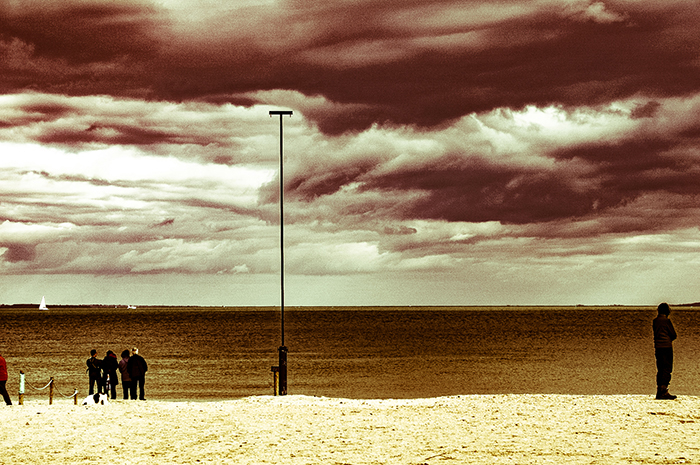 Standing on a Beach Photographer - Stephen Riley
Previous
Next

This is a shot from some time ago that I couldn’t resist revisiting and giving a bit of creative treatment. The colours are changed and a certain atmospheric graininess has been added.

I don’t know if it’s something to do with being an island nation, but many of us have a fascination with the sea. Though maybe fewer than I think actually do; maybe it’s that artist/phenomenologist thing again; maybe it’s just artists, poets and other dreamers that find images like this, with people gazing out to sea, beguiling. There’s something about the ‘edgeness’ of it. No, I don’t mean ‘edginess’ – I mean that sense of being right on the edge, in the place where one medium changes to another, where a world than can be lived in by us meets one that cannot; that place, also, where the sense of mystery in what’s beyond the offing is palpable. It doesn’t matter that we know what’s over that horizon, that primal sense of mystery still remains. And, of course, I’m not the first artist to explore that; many of Friedrich’s paintings feature some unknown individual – a cipher for ourselves – gazing out to the unknown over the sea.

I wonder if anyone will recognise where this is. It's a little bit away from my home patch in Somerset, but still within the South West.
Next
Previous