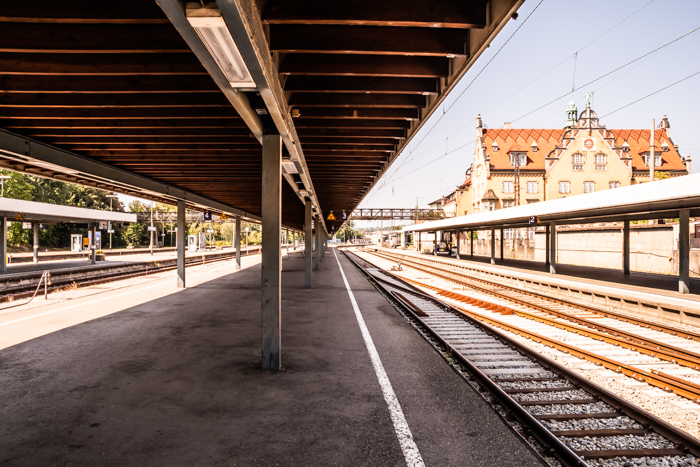 Photograph of the week

Have camera will travel
Are professional photographers allowed the liberty of holiday snaps? Is a professional photographer ever really off duty? Well, anyway, this is me taking such a liberty. Mind you, I’m not sure this constitutes a holiday snap in any conventional sense. Naturally, I did take the usual kind of photographs – those of family and famous tourist haunts – but this is one that steps outside of those areas and is more to do with my interest in the poetics of space.

This is a train station in the south of Germany. I guess it doesn’t matter much which one – it is a fairly anonymous scene – but this, for me, has a kind of atmosphere. I think all train stations have one. Maybe it is something to do with the steep perspective, enhanced by the railway lines and the rigidity of the architecture that is obliged to follow them. But I think there is also something more poetic and human about train stations. Prose and poetry, old black-and-white footage of soldiers going off to war, and films from Brief Encounter to Harry Potter have imbued them with echoes and expectations of hope or loss; stations are replete with a sense of history, unless of course they are the tedious ones we use every day to commute, but even they will take on some mystique in the years after we have ceased to use them in that way.

Here, I have caught this view when momentarily there were no people in shot, so there are no distractions from the hard linearity of the architecture. I have also tweaked the colours and contrast until it reached a stage that I hope conveys the atmosphere I found there.
Next
Previous