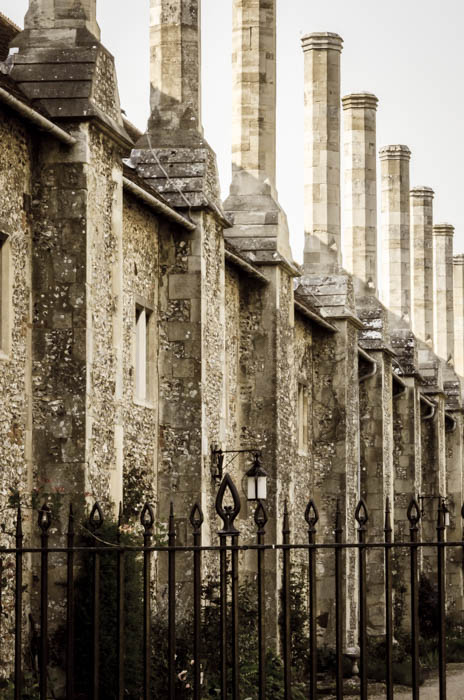 Shooting architecture, like all branches of commercial photography, is an activity that comes with its own challenges, needs and mysteries.

Depending on what you are trying to achieve, techniques may vary widely. Here, I have used a zoom lens set at 80mm focal length. This has a relatively ‘zoomey’ quality of compressing the chimneys. For me, that sense of repetition was a key feature of what I was looking at and was what I wanted to capture. For the same reason, I have shot it ‘portrait’, so the sense of compression and repetition match the narrowness of the format.

Distortion can be a problem: lenses are round and buildings are straight – well, usually, though a Frank Geary design is likely to be less so, as is a Gaudi. At 80mm, lens distortion is minimal. However, the image was still slightly bent and I have taken that out in the editing process to make a sharply vertical shot.

Another consideration is depth of field (how much of the photograph is in focus). I have shot this at a very small aperture – f25 – so that as much as possible remains sharp.

Finally, I have manipulated tones and colours to give a sense of age, which seems apt given the venerable nature of the subject.

This looks rather like Wells, close to where I live, but it isn't. I wonder if anyone can identify it??
Next
Previous