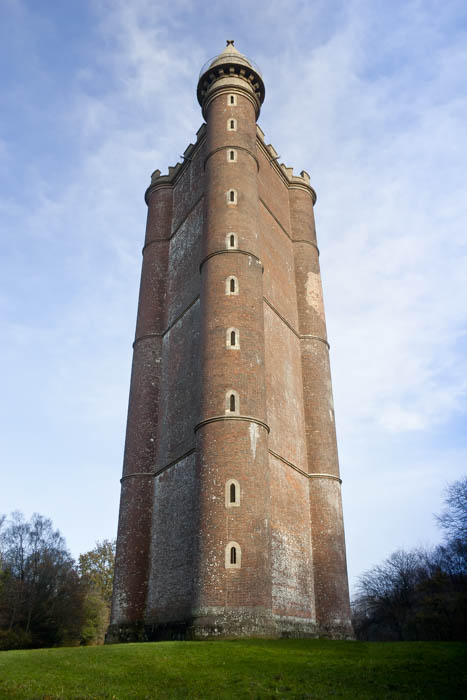 I have photographed this structure many times. I expect many looking at this will have done so too.

Trying to pin its official location down is not quite straightforward, as it is part of the Stourhead Estate, which is in Wiltshire, but King Alfred’s Tower itself stands just inside Somerset. I guess you could regard the whole thing as existing on the Somerset-Wiltshire border. But it is, of course, only a smidgen away from the Dorset border too, and the building makes a vantage point over all three counties, which usefully allows me to mention that, based a short drive from this place, I cover those three counties with my photography.

The tower is also known as The Folly of King Alfred the Great or Stourton Tower, and it stands on Kingsettle Hill in the parish of Brewham. It was completed in 1772 and was designed by Henry Flitcoft on behalf of Stourhead owner, Henry Hoare. It was first devised in the 1760s to mark the end of the Seven Years' War against France and the accession to the throne of King George III. The ‘Alfred’ aspect comes from the belief that it is near the location where the eponymous King of Wessex brought together the Saxons in May 878 to take on the Danes at the pivotal Battle of Edington.

The photograph itself was shot at ISO200, f11 and 1/100th of a second. F11 gives me a good depth of field, ensuring the whole tower is in focus. The focal length was just 18mm, adding to the drama of the shot by creating that steep perspective.

As a photographer with a particular interest in the atmosphere and characteristics of architecture – my Master’s Degree is in Art and Architecture – buildings like this are always a joy to shoot.
Next
Previous