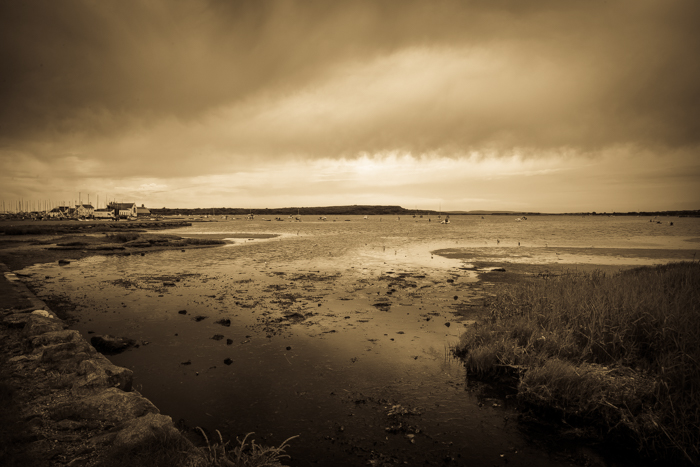 Coastal Dorset
This is a photograph of the Dorset Coast: Mudeford, to be specific. As you can see, it was not an especially bright day, but I have given the finished shot a touch of digital tweaking to add a bit of drama to what was already an overcast scene.

Mudeford (pronounced ‘muddy-ford’) is a small place on the outskirts of Christchurch. I once lived not far from here, and it was a favourite place for walks – the sort of place you could take your troubles and allow them to dwindle in the eternal rhythm of the carefree sea.

This photograph is taken a few hundred yards short of the sea proper. It shows a kind of inland lagoon, connected to the sea only via a narrow channel, where the Stour pushes its way out into the sea, and where the sea forces its way back in when the tide turns – just past the buildings on the left of this shot. The currents are incredibly powerful, and at certain times you can see freakish watery eruptions, as the conflicting forces do battle just off the shore. That bit at least is not a place for swimmers or inexperienced sailors. The lagoon, however, is largely protected from all that and is a good place to tie up your boat and for safe kayaking, and it is often sunnier than it appears here.
Next
Previous