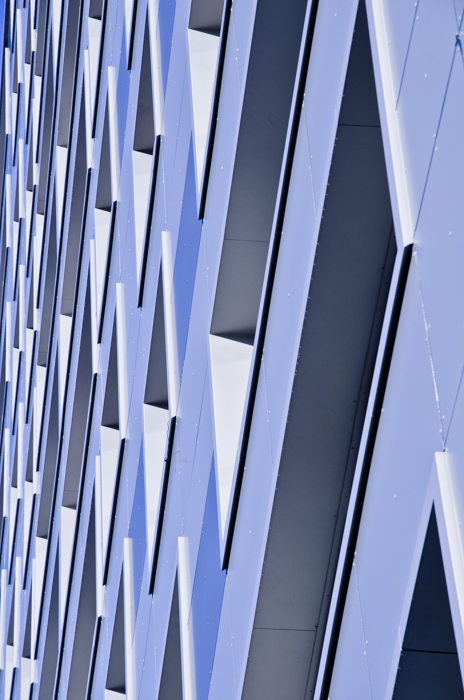 A building with composite aluminium cladding.
Previous
Next

It is no doubt unusual for an artist/photographer to have anything to contribute on a matter related to building and engineering. However, I was once an engineer, and more recently I worked as a photographer and copywriter for a firm that fabricates composite cladding not too dissimilar from that used on Grenfell Tower. I learned then what developing investigations into the disaster are now revealing: that not all cladding systems are created equal.

The firm that I worked for used a well-known, world market-leader brand. To save any awkwardness, I’ll refer to this as ‘Brand A’.

The composite panels supplied by Brand A were made of three layers: aluminium on the inside and outside, and a layer of plastic in-between. As we all know, the qualities of plastics vary widely: some are readily combustible, some are not. Brand A’s panels were non-combustible, but they were also dearer than the sort that burn.

The issue of fires in/on tall buildings came up some years ago, when I was working for the company mentioned above. There had been a fire on a tall building in an Arabian city – not the recent one in Dubai, this was much earlier, perhaps around 2012/13. In some footage published online, it was clear that the cladding was on fire.

Brand A issued a press release at the time, dissociating themselves from the fire and the type of material used on that building, and making it clear that their cladding was safe. Brand A were not only concerned at the possibility of their product being undermined by the cheaper, combustible sort, they were also frustrated that they failed, sometimes, to get contracts because manufacturers of cheaper, dodgier panels were getting the work when price was the overriding concern.

But here’s the thing: when you look at a finished building covered with cladding, there is no visible difference between the safe panels, such as Brand A’s, and the ones with the flammable plastic core. The only way to know is for experts to investigate precisely what was used at the installation stage. This is not going to be just a UK problem; there are buildings covered with cladding of various sorts the world over which will need to be scrutinised.
Next
Previous