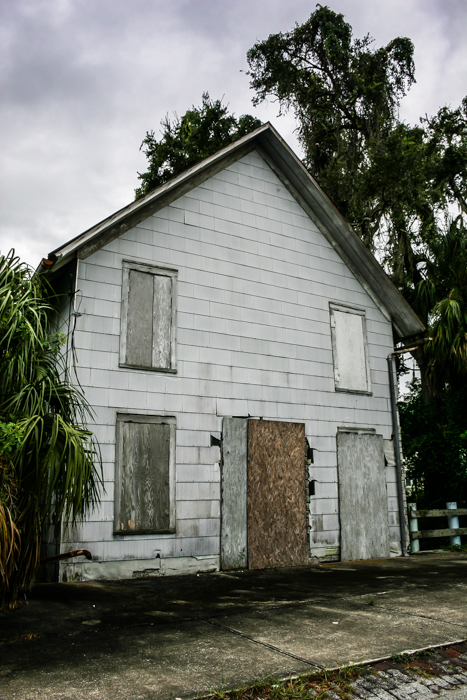 I took this photograph a few years ago in a small town in Florida, for no reason beyond the fact that something about it appealed to my sensibilities. I think it is not unusual to wonder, when looking at a tired old building, just what went on there and why it has been allowed to fall into disrepair. We can project a history, maybe even a dramatic one, onto something that can’t speak back and is probably, in reality, the locus of nothing much of interest. All the same, one has a sense of ‘ghosts’, of the lives that were lived there and of the kinds of personalities who called this place home. Were they nice people, nasty pieces of work, or both? How did they live? Banal lives become beguiling and nostalgic if we allow them to. And then there is the thought of their possessions, which would all be charmingly quaint and old now.

I’m put in mind of Edward Hopper’s paintings of fairly ordinary buildings, which become fascinating because he draws us in to meditating on them – the ordinary becomes poetic and pregnant with possibility. I’m also drawn back to one of John Updike’s ‘Rabbit’ books – one from so long ago that I can’t recall which – but I recall being struck by reading that ‘Rabbit ran past the frame houses’ (paraphrase). This was evidently an American style of building which I as a Brit couldn’t properly envisage, though I got the sense that it probably meant a low-grade structure, presented by the author as something less desirable than a properly-built brick or stone house.

And so, as the building in this photograph is neither brick nor stone – or even a decent timber structure – I guess it is a frame house something like Updike had in mind.
Next
Previous