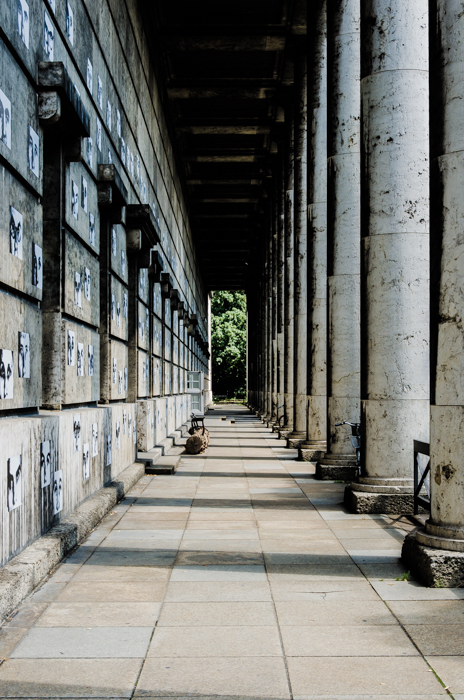 I took this photograph on a recent trip to Munich. It is of the colonnade on the front of the Haus Der Kunst (‘House of Art’). Originally named Haus der Deutschen Kunst (The House of German Art), it was built by the National Socialists in the 1930s, as propaganda and to contain and present propaganda. Naturally, it is characterised by symmetry and order, and via references to Roman classicism, to Fascist ideals.

Ironically, the artists shown at the derided ‘Degenerate’ exhibition – including Grosz, Kirchner, Klee and Nolde –are now regarded as amongst the greatest practitioners of the twentieth century, whilst those lionised in the Haus der Kunst are scarcely footnotes in the history of modern art. It is also ironic, but typical of the advanced liberal society that Germany has become, that the museum now shows art that is the opposite of what its founders intended:

“Haus der Kunst is a non-collecting public museum and a key global center for contemporary art. It is dedicated to the exploration of the diverse histories of contemporary art based on a foundation of focused exhibitions, research, and education.

Through its programs, Haus der Kunst affirms and acknowledges that the trajectories of contemporary art are global, multifocal, polysemic, and unbounded by cartographic, conceptual, and cultural limits.

Haus der Kunst sharpens this perspective of contemporary art by implicating many viewpoints, deploying multiple tools, and developing a critical context for the examination, articulation, illumination, and transmission of the historical dimension of contemporaneity. Haus der Kunst achieves this through a culturally relevant interdisciplinary program of the highest artistic merit.”

The architecture remains, but both inside, outside and on the physical structure of the building, anarchic, unboundaried creative interventions are encouraged, in stark and joyful contrast to the strict limitations of the museum’s original remit.

As for the photograph: I enjoyed considering the relationship of the photographic frame to the repetitive pattern within the architecture, as well as what could be done to the contrast and colour saturation with the odd digital tweak, post-production. Whilst parts of an exhibition can be seen pasted irreverently onto the wall on the left, I hope I have conveyed in these tweaks a certain ‘chilliness’, which the thought of the building’s history gave me.