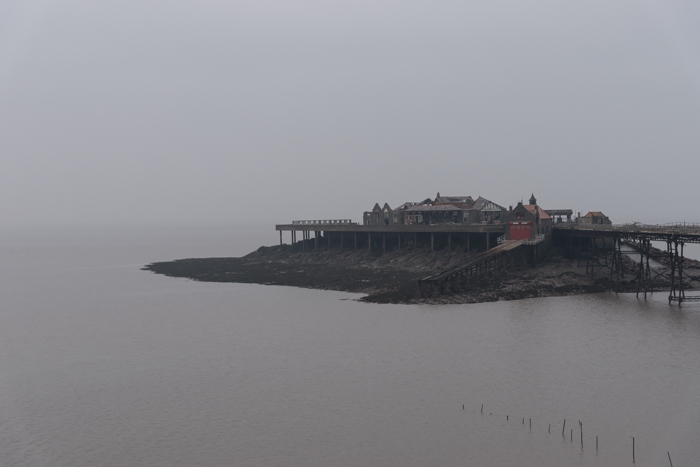 Somerset’s misty coastline
This is one of a large number of photos taken on a recent winter trip to Weston-Super-Mare, where North Somerset abuts the Bristol Channel.

As I’m sure many will recognise, the mass in the middle of the shot is Birnbeck Island, looking mysterious and more like Shutter Island than a fun place for holidaymakers, as it once was. I recall visiting it on a holiday trip as a kid, way back when you paid for your fish and chips with shillings and pence and the Ford Anglia was considered cutting-edge design.

The pier that connected the rocky outcrop to the mainland (at Worlebury Hill) has suffered many highs and lows since it was opened in 1867, due to the hefty rise and fall of the Bristol Channel and some ferocious weather, as well as the odd fire and changes in holidaying trends. It was again seriously damaged in 1990 and closed for safety reasons in 1994. All of the buildings are in an advanced state of dereliction and the pier itself seems ready to fall into the sea. Walls have crumbled, slates have blown away, exposing interiors to storms, and wrought ironwork has buckled and rusted away to nothing. There have been various proposals to redevelop the site, including some radical architectural visions, but for now the state of the market and the formidable, costly civil engineering implications mean that nothing has come to fruition.

From a romantic’s perspective, the island has a dark, brooding quality, enhanced now by its isolation from the mainland. One can imagine it replete with the ghosts of myriad long-dead visitors, milling around the wrecked buildings, unable to escape.

I would have loved to have been able to get onto the island with my camera, but there was no apparent way of doing so, and I suspect the Health and Safety brigade would have intervened if I’d tried.
Next
Previous