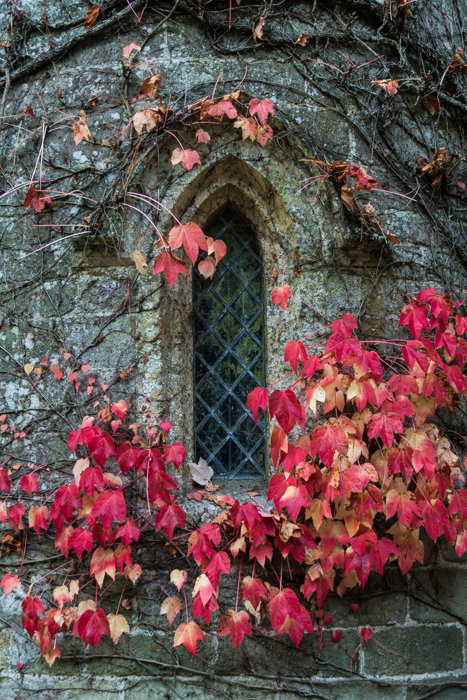 I’d spent an afternoon at Stourhead, looking for that perfect shot. Of course, as it was autumn, the place was overwhelmed with other people trying to do the same. The usual shots of Stourhead, of the bridge, the water and the various architectural follies, were more likely to be crowd scenes, and the bright colours of the leaves would be interspersed with even brighter cagoules and fleeces. But then, there’s always something to photograph, if you look.

This is part of a gatehouse that I passed on the way back to the car. The golds and reds that covered the whole estate were represented here by just a few well-placed leaves and augmented by that lovely leaded gothic window.

The light was fading, so the shot had to be done at a fairly low speed – 1/80th second – and wide f-stop – f4 – but this was all fine, as little depth of field was required and hand-holding the camera at that speed is reasonably safe. Plus, I didn’t have to raise the ISO above 200, so noise isn’t a problem.