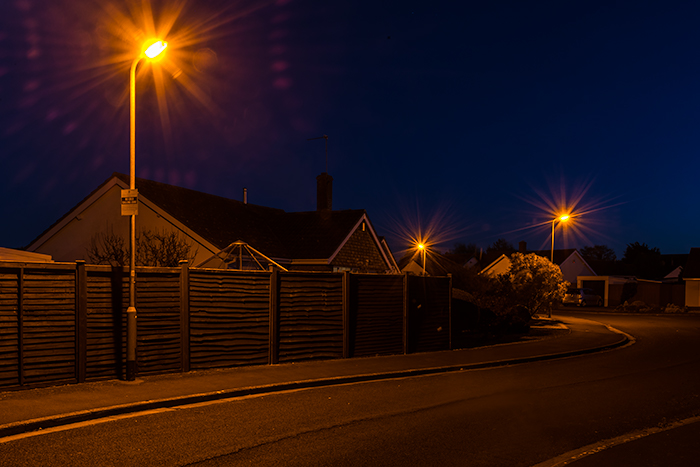 A photograph taken at night in Somerset
Previous
Next

Look out - he's got a camera!
I recently did a commercial photography job in Burnham-on-Sea, Somerset, for a street lighting firm. Naturally, as the shoot was to do with lighting, it had to be done at night, to show the lights doing what lights do. And I can report that, if anyone thinks professional photography is glamorous, shooting street lights in Burnham-on-Sea on a freezing November evening is not. There’s nothing enchanting about gripping an ice cold tripod in fingerless mittens, being scarcely able to see what you’re doing because the camera’s controls are in darkness, or operating a camera that won’t focus because it can’t see what it’s doing, either.

On the plus side, there’s something quite magical about night photography. As any self-respecting vampire will tell you, the world is a different place at night. As darkness descends, even the most boring photograph imaginable might just take on a hint of atmosphere and mystery. And then there are the interesting things that can happen in the relationship between the camera and the available light, like the strange colours familiar things now take on, or the starburst effects that come from artificial lights. These can be exaggerated or eliminated by changes to settings in the camera.

I’ve had various photographer colleagues tell me they’ve been subjected to shouts of ‘paedo’ when they’ve been taking photographs in public space, as though, for their assailants, the obvious and only use for a camera is to take pornographic images of children – if there’s a camera present, that must be the reason. It does make you wonder about the lives of people who think that. I’ve never been subjected to that specifically, though once, when I was taking photographs of landscape, pointing the camera across empty fields from a country lane, someone yelled at me from a passing van ‘you dirty bleeder’.

It wasn’t quite like that on this occasion, but I was still the object of some serious suspicion, though quite what the pesterers thought I could be shooting that was even remotely salacious, with the camera pointing down a boring, featureless street, pitch-black but for the odd patch of sodium yellow that the lights gave, escapes me. Another suspicion might have been that I was one of those people employed to catch disability benefits claimants sky diving or pole vaulting on the quiet, but had that been the case, would I really be stood in full view in the street, using a great big DSLR camera on a hefty tripod, and wearing a hi-vis jacket?

The great irony in this is that contemporary technology has created a situation where most people seem to take photographs most of the time, via the convenience of phone cameras, and that can be done far more discreetly, if furtive photography is their game. Realistically – for those capable of joined-up thinking – someone taking photographs in plain view, making no attempt to hide himself, indeed trying his best to make himself visible through the use of high-visibility clothing, is not someone who is doing something nasty and secretive.

So, for future reference: I am not a paedophile or benefits snooper; I’m not a Russian spy either, and my camera won’t steal your soul. I’m just making a living. Paraphrasing Freud: sometimes a photographer is just a photographer.
Next
Previous