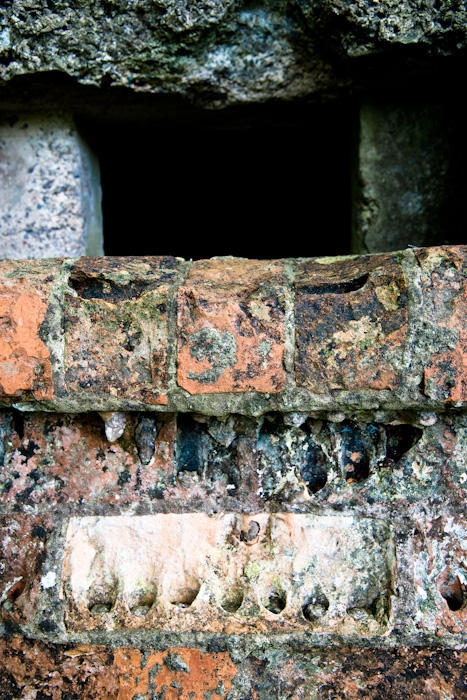 Am I the only person who sees a face in this? I suspect not. There is a natural human inclination to find faces, whether they are there or not. In case you cannot see it, there are two evil looking ‘eyes’ just above half way, and beneath them is what looks like a sharp-toothed, manic grin.

This photograph, taken in the Somerset countryside a few weeks ago, is of a wartime pill box. Its location seems strange. It is in a field near Dinder, a few miles from the city of Wells. Surrounded only by woodland, meadows and cattle, with nothing of apparent importance anywhere near, it is hard to see what it was intended to protect. Possibly there was, nearby, some significant military installation which has long lost its purpose and been taken away. Or maybe the choice of location was to do with the anticipated route of the expected German invasion, sweeping up the country from the south coast.

How odd it was to find it so silent and overgrown, when one considers the extreme violence for which it was intended and the terror and deafening noise there would have been here had it ever been put to use.

With that in mind, it is easy to see some kind of significance in this 'face', if you are so inclined. Its features have been formed by seventy-odd years of erosion, laying bare natural flaws in the materials. Cement that crept into tubular air gaps in the bricks when the building was constructed has been exposed and now takes the form of fearsome, pointed ‘teeth’. The unfathomable black hole, above the 'face', is the gun emplacement.

Given the violence for which the building was created, it is tempting to see this arbitrary collection of shapes as some kind of demonic presence, longing for another war, still eagerly awaiting all the violence and torment that might bring.
Next
Previous