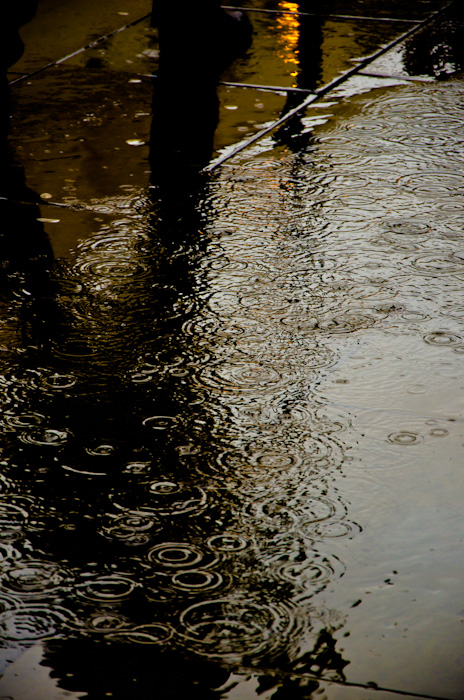 It’s a rainy day here in Somerset. I will be heading off out with my camera shortly, regardless, but in the Blue Peter tradition, here’s one I prepared earlier.

This photograph was taken on a day spent dodging the showers and trying to keep the wet out of my camera. Diving into doorways and limited light meant that what could be photographed was restricted, but if one cares to look, there is beauty everywhere. And here, just in the wet on a footpath, caught in the reflected light of an overcast sky and the early-switched-on streetlamps, is an insignificant moment, preserved forever as a thing of beauty.

Rings made by raindrops are gone in an instant and are far too commonplace for us to care about them, but, as the camera opens its shutter for 1/125th of a second, the fast-moving ephemeral is made motionless and becomes available for contemplation.

Photography can capture everything from a world-changing event to almost nothing. There are those who say it is not an art form. However, the Impressionists were very much influenced by photography, and their approach to subject matter – sometimes just an observation of how light distributes itself around a haystack or lily pond – bears this out. Of course, the camera makes the task less reliant on manual dexterity, but the ability to observe, and the faculty to care to do so, are still required.

Coincidentally, I went to an exhibition of photography at Bruton Art Factory at weekend, some of which featured the flooding earlier this year in Somerset’s lowlands. Rain, and what happens to it once it has landed, are big issues in this county. This image was, in fact, taken in Manchester; a place noted - somewhat unfairly in my view - for its rainfall. I will soon, no doubt, have equivalent images featuring my adopted county, but I hope, for all our sakes, that there will be no floods to depict and that the fine photos I saw in Bruton on Sunday will be the last made on this subject for a long time.
Next
Previous