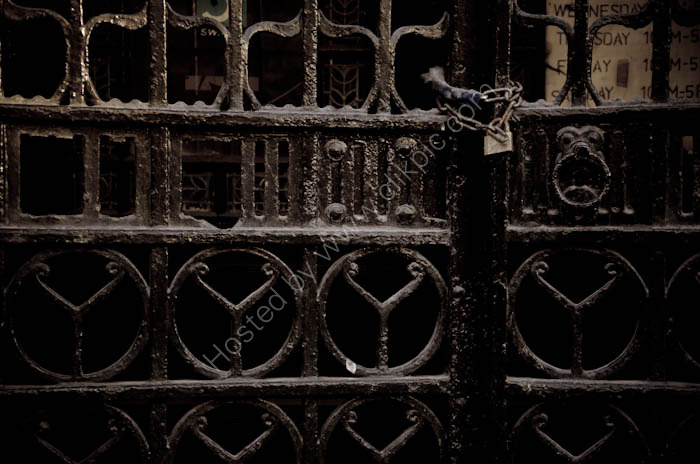 Vestige of Victorian art and architecture
On Market Street in the Manchester suburb of Stalybridge lies this disused sandstone structure with its artistically sculpted ironwork. It may have been many things throughout its history; furniture showroom was at least one of its uses.

The photograph captures one small part of a beautiful old building; one of many pieces of architecture, of variable levels of interest, that have lost their function in this Tameside town. What remains are these traces of a more vibrant Victorian past, with its combined sense of age, communicated through generations of rust and repainting, and more elaborate design values than those adopted now. The long-term decline suffered here is a matter that 'Love Stalybridge' (see on Twitter) and many others endeavour to challenge with their efforts to revitalise the borough.

The lock seems poignant – a signal of something now permanently gone – as does the sign behind the gates: a timetable of opening hours, hand-drawn using stencil and ink, it is a vestige of a pre-digital past.
Next
Previous