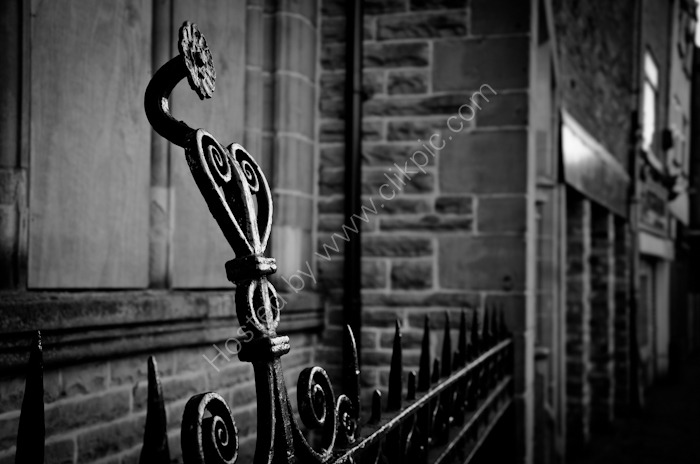 Elaborate fence creates a kind of sentinel for the street
Sometimes it’s hard to put your finger on what it is that makes you take a particular photograph. You start off with the view that a thing has a certain something about it, but what that is might not reveal itself for a while. Indeed, it might only be the act of taking it into the camera and seeing it in a different way which reveals that.

The obvious feature that caught the eye with this is the distortion: this elaborate piece of old ironwork has been forced back from the vertical, but why that matters is less clear. Perhaps curiosity plays a part: we do not know how that happened. Having been a resident of Stalybridge on and off for a very long time, my mind goes to what drunks might have got up to on a Saturday night: a bit of gratuitous vandalism. But it might not be that at all. Certainly, it would take some strength to manually bend such a hefty piece of metal, so maybe it was damaged by a vehicle or in the process of work being carried out on the building. We will never know, but the effect is of a strange, almost surreal, shape making its way into our presence and consciousness and demanding attention.

What seems most engaging is that the device, having a symmetrical quality and circles either side of that arrangement, has resonances of something human. Maybe we see eyes and a nose, or perhaps a cartoon character, like animated anthropomorphised scissors in an educational cartoon, or some household utility object that has come to life in Walt Disney's 'Fantasia'.
Next
Previous