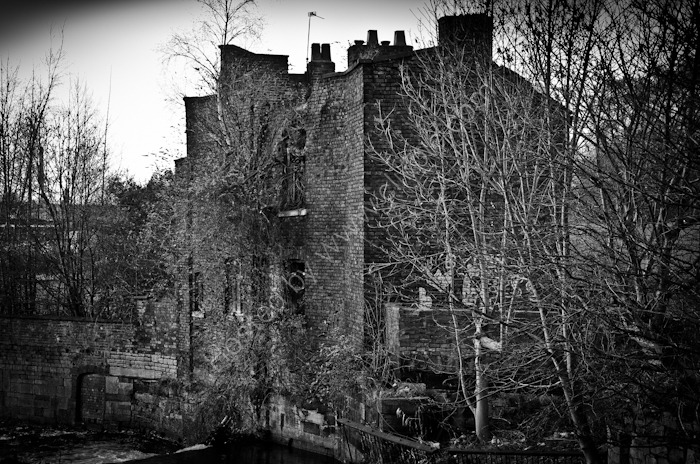 Stalybridge, February 2014, and matters of interpretation

Veracity in photography
I put this photograph onto Facebook and in doing so prompted a little discussion amongst friends.

It concerned the vignetting effects that I had used. I will say more about the decision-making process in that shortly, but the framework for such a discussion is also interesting.

In spite of acres of photographic theory unpicking the notion of the true or pure photograph, we seem instinctively to engage simultaneously with a photograph and some notion of veracity, the two thoughts then being brought to bear on each other. With a painting, we expect and accept that the artist will interpret on his/her own terms, whereas, with the camera, any visual manipulation seems dubious – a con, perhaps – as though there is an ideal or perfect version of the photograph against which this one needs to be measured. Was the manipulation fair? Is it misleading? But, misleading from what, exactly? Any photograph is influenced by the camera, lens, available light and the photographer’s decision-making processes. We seem to skip past this intellectually, but then to mistrust what happens in the darkroom or on the computer. The former is fair game; the latter is the object of suspicion. But when it comes down to it, the whole process is part of the creative act. Even the most ‘direct’, unconsidered photograph is not the only possibility of itself.

I am fundamentally a painter. Perhaps for this reason I approach the editing process in the way that I do painting: the ‘raw’ photograph suggests certain outcomes; I try them out; they work or they don’t; I try something else; and on it goes until a satisfactory outcome is achieved or the photograph is abandoned. In the case of this shot, black and white with vignetting seemed to work. The reason for this was that the image – a now-derelict mid-19th c building – reminded me of so many photographic townscapes from the 19th c. These would often be intensely sharp, due to the use of large glass photographic plates, whilst having vignetting issues due to limitations at the edges of lenses. It is unlikely that the same level of sharpness could be achieved with a modern 35mm-equivalent digital camera, but the vignetting was possible in Lightroom. Yes, it is artifice. But, on the other hand, it is an interpretation, and given that it is an interpretation based on the building’s time and the photography of that period, maybe not an unreasonable one. However, the one thing I am not trying to do is pass it off as the definitive truth of what ‘what’s there’ looks like; ‘what’s there’ is a muse for what can be done creatively.

In fairness to my friends, both are artists and both were aware of this kind of thinking (when many others might not be); the only doubt was whether I had slightly overcooked the vignetting. What do you think?
Next
Previous