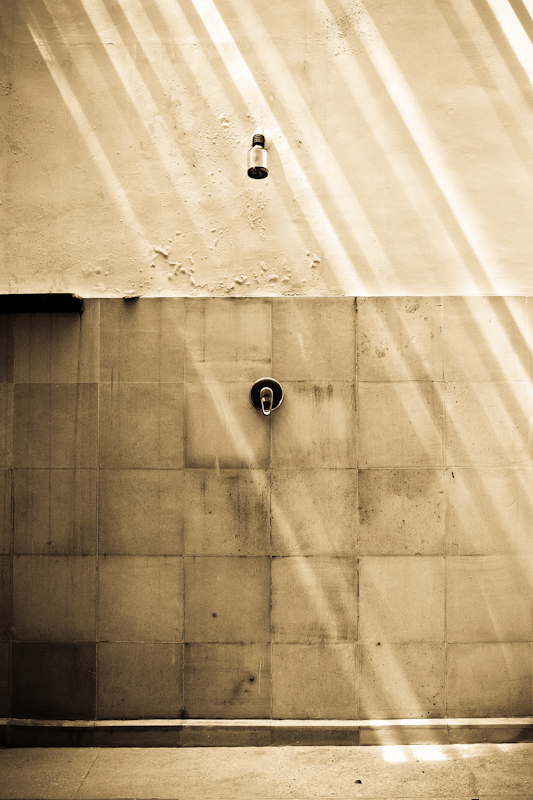 Photograph by Stephen Riley
Previous
Next

The shower and collective memory

What is it about showers?
This enigmatic shot was taken in the pleasurable and not especially unusual circumstances of a holiday, at a moment when streaks of light were making a beautiful intervention into the scene. Yet, something about what we see seems to suggest that we should seek some other, more profound explanation.

Showers have a mixed history, no doubt giving us the range of contradictory cultural baggage that comes into play when one is contemplated. On the one hand, a shower used to have connotations of luxury – at least for people of my class and generation – as it was a special and expensive thing, not seen in ordinary homes in my youth. On the other, the shower can be a place of subjugation and humiliation in prisons; this being taken to the ultimate through the cruel deception it was used for in concentration camps. But it can also be a place where the thrill of an illicit sexual encounter might take place; the sexual-emotional high sometimes made greater if the shower is a public one.

These extremes are echoed too on the bodily level: the shower is one of the few places where we (putatively uptight) Westerners have the privilege of naked free movement and touching our own skin without embarrassment. Perhaps, also, we unwittingly give ourselves up to a moment or two of some informal equivalent to tai chi in our daily dip. But then, we are also naked, distracted and at our most vulnerable in the shower; the anxiety this leads to being exploited significantly in (and further implanted into our collective psyche by) Hitchcock’s ‘Psycho’.

Of course, photography plays a significant part in this. Encountering this shower in the usual circumstances, it would just be what it is: the shower in a holiday let. However, extracted and represented by the camera, it is held up as being perhaps of special interest and we seek clues to what that special significance might be.