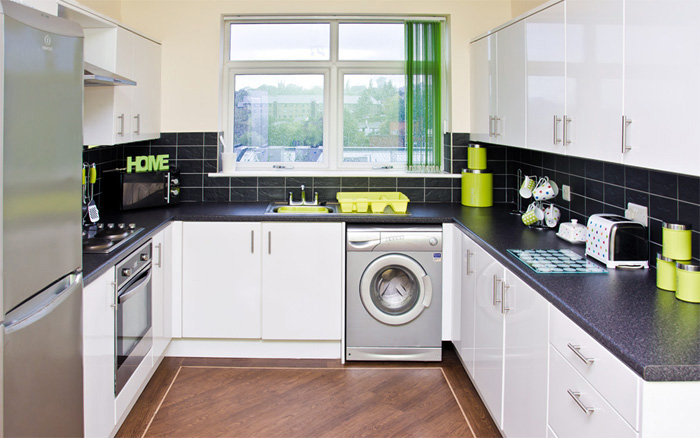 Making the most of space
I was invited to produce interior photographs of an apartment in Manchester (Tameside), by its owner, who was disappointed at the shots the letting agent had produced.

The flat was large and very well presented. The shots, however, did not do it justice. They were clearly taken on a cheap compact camera by someone with no knowledge of photography. What was a beautiful flat was being undersold – made to look shabby indeed – the by the photographs.

The task of rectifying this was not straightforward – you could see why an amateur had struggled. There were two main problems: the spaces were difficult to shoot because one had to stand in the room, pushing out of frame much of what needed to be seen. This could be dealt with using a wide-angle lens. But then, this created a second problem: curves and internal perspective within the shots.

In this deceptively simple shot of the kitchen, you can see that everything has been pulled into shape. The original photograph, being so wide angled, showed straight edges as curved and sloped in steeply towards the top. These faults have been pulled out and the image made orthogonal.

The human eye corrects for vertical perspective; the camera does not. Making the shot orthogonal makes a truer image of what one would see when there. Handing these photographs over to the agent means that the flat is not only now shown in a better light; this is actually a more honest representation, to anyone who might be interested in viewing the flat, of what they will see when they get there.