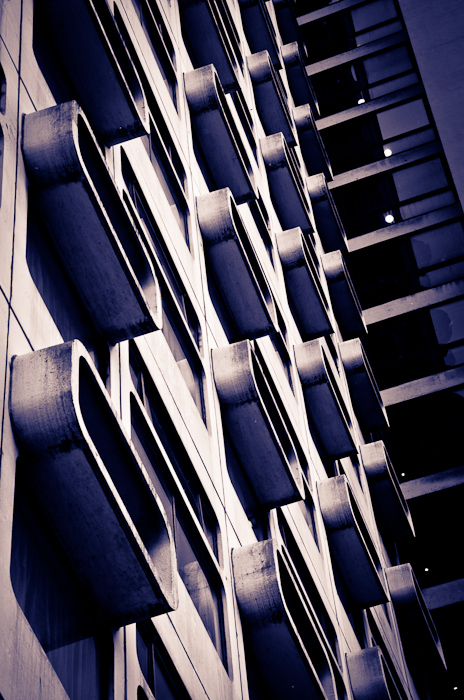 Modernist Marvel in Manchester
+++++++++++++++
This city centre apartment complex on the banks of the Irwell, near Victoria Station, was once Highland House; the then regional headquarters for British Telecom. It is now repurposed to meet the shifting needs and uses of the area. Very different from the former cotton merchants' offices of Whitworth Street and the Northern Quarter, it has nevertheless followed the same path and become contemporary housing, as the city centre has once again become a populated place; not just shops and offices.

The city’s history goes back as far as the Roman settlement, Mancunium, off Liverpool Road in Castlefield, which is also the site of the world's first railway station, now also repurposed, as MOSI: Manchester Museum of Science and Industry. And, of course, it is the Industrial Revolution that is the real tipping-point for Manchester; the moment when its industry, creativity, enterprise and trade put it firmly on the world map as a hub for all forms of economic activity. As they used to say: 'what Manchester does today; London does tomorrow'. Rolls Royce started out here, as did those other aviation pioneers Alcock and Brown. The genius Alan Turing, whose codebreaking activities at Bletchley Park helped shorten the War and who helped create the first computer, was based at Manchester University, before being driven to suicide by official persecution because of his homosexuality.

Manchester has been through many changes since, and this is reflected in the streets and buildings, as different historic moments - creative, destructive and re-creative - have been etched into the visual landscape. Some things survive; some do not; and the effect is an endlessly changing, visually stimulating mixture of the ancient, modern and all shades in between. Manchester’s architecture is indeed an endless series of creative opportunities for the photographer.

The ‘television-shaped’ protruding windows that characterise this piece of brutalist cast-concrete architecture are instantly recognisable as an aspect of 1950s/60s building design. Once an example of the 'white heat' of Britain’s post-war ambitions, buildings such as these are beginning to form different relationships with our sensibilities. Some, like the Bus Station in Preston and the Tri-Corn Centre in Portsmouth, have been so denigrated that they cannot survive contemporary tastes and thinking. But I believe that, over time, this kind of structure will become properly part of the landscape and seen with the same nostalgia that Victorian an other earlier architecture is seen, and maybe there will be regret at what has been lost and relief at what has been saved.

Edited in this high-contrast, near-monochrome style, the building seems to take on an almost metallic quality, which seems to work with the uncompromising, forcefully utopian thinking of the times.
Next
Previous