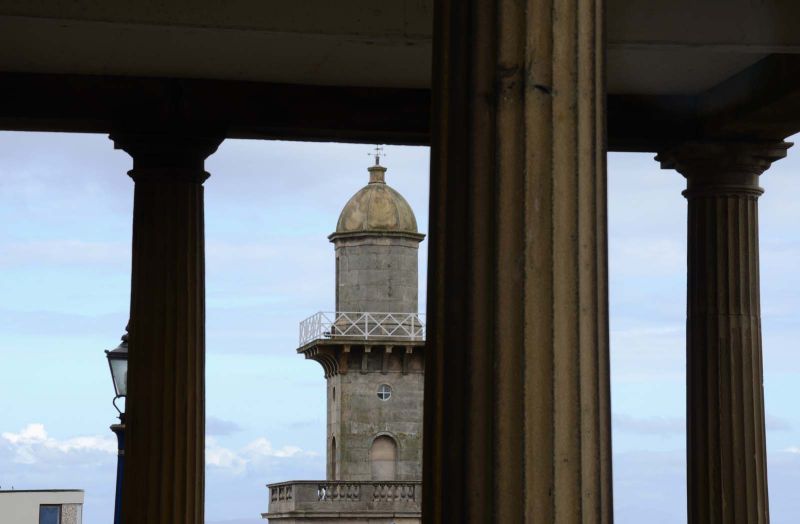 Photojournalism by Stephen Riley at the historic Lancashire Hotel
Conducted photoshoot at North Euston Hotel, Fleetwood; wrote an accompanying article which at the time of writing is under consideration for publication in Lancashire Life.

Update, July 2013. the item was not published by the magazine. Here it is, therefore:

You would need a heart as hard as the grit stone from which it is hewn not to have a soft spot for the North Euston Hotel. Although much has changed in Fleetwood since it was built in 1841, a sense of pride and grandeur that reflects the optimism of those times is palpable in its architecture. Fashioned in an outward-facing arc on the tip of the peninsula that is Fleetwood, it echoes the shape of the coast and has views both of the Wyre estuary and of the sea at Morecambe Bay, into which the river flows. Its elegant curved outline could be an inverse of one of Bath or Buxton’s Georgian crescents.

The history of the hotel is linked intrinsically to that of the town. Fleetwood was laid out in the 1830s by the local landowner Peter Hesketh, and named by him after his ancestral family. Very much a creation of the industrial revolution, Fleetwood was built with specific roles in mind: it would be a sea port and resort, and it would provide a vital link in the country’s transport system. The rail network was still developing at this time, and what we would now call the ‘West Coast Line’ stretched no further north than Preston. A new link from there to Fleetwood enabled passengers from the South, heading for Scotland, to transfer to a steamer for the final leg of their journey. The North Euston’s role, as well as being the architectural highlight of the town, was to provide overnight accommodation for travellers between the two stages of their journey. And it was this connection between the then extremities of the line - Euston Station in London, and its counterpart in the North – that gave the hotel its name. However, that invaluable feature, of being the final stop on the line and the best route to Scotland, was not to last. By the middle of 1850s, the railway link between London and Scotland was completed, and Fleetwood's role as transfer point was over. Tourism alone was not enough to keep the North Euston afloat and it was sold to the government, which used it as a military training school and barracks. It returned to its original function in 1898.

Fleetwood, like many of Britain’s industrial revolution towns, has seen great highs and lows; most of the lows occurring in the last third or so of the twentieth century. Dr Beeching’s cuts severed the railway link. The resort trade suffered from a trend towards foreign holidays. The docks, even with that pivotal transfer role gone, managed to stay busy until the 1980s, when changes in trade and travel routes brought decline. The once mighty fishing industry, which was synonymous with the town’s name, was largely eradicated by fallout from the 1970s ‘Cod War’. But Fleetwood is fighting back, and in these changing times, the leisure and service sectors are key.

In the 1990s, the redundant Wyre Dock was turned into a marina, and the land adjacent became a retail centre: Fleetwood Freeport. Millions have been spent redeveloping the Marine Gardens and seafront. The tramline that links the town to Blackpool has been re-laid and upgraded to a light railway. ‘Tram Sunday’, the biggest event of its kind in the region, features vintage trams and other classic vehicles, and attracts around 20,000 visitors annually. However, in this Olympic and Jubilee year, there are even greater attractions: Fleetwood will received the honour of being a stage on the route of the Olympic Torch, and a whole series of events is planned for the Queen’s Diamond Jubilee, including lighting the Beacon on the Mount, picnics on the lawns of the Marine Gardens, kids events and a firework display. But perhaps football fans will see Fleetwood Town’s promotion to the Football League as the biggest treat of all.

The North Euston has a clear role in this revitalisation. The owners pride themselves on offering something more elegant than the routine facelessness of modern chain hotels. There is an ongoing programme of refurbishment, all carried out sympathetically with regard to the hotel’s history and Grade II Listed status. The ballroom, restaurant and many of the guest rooms have been renovated. A new lift is currently being installed, which will make the grand staircase in the foyer wholly visible for the first time in decades. The Victoria Bar is next on the list for restyling. But it is not all about structure and décor; there are activities: craft weekends; corporate events; wine tasting, murder mystery and beauty product evenings; line, ballroom, sequence and tea dances; and the Victoria Bar hosts live bands every weekend.

After the gloom post-industrial era, Fleetwood is re-emerging into the light. The North Euston has survived it all, and those of us who travel and love to see great buildings kept vibrant and relevant are very pleased to see it.